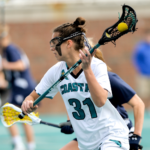 Bromley was a four-year starter for the Chanticleers, where she ranks 2nd all-time in assists, 3rd all-time in points and 7th in goals scored. In 2019, Bromley became the first Chanticleer to be named the ASUN Scholar-Athlete of the Year. She also earned ASUN All-Academic team honors in 2018 and 2019 and was named ASUN Second Team All-Conference following her senior season.

The Cary, N.C. native earned her Master’s Degree in Business Administration from Winthrop University in May 2021. Fall 2021 will be Madeline’s first season coaching with Ultimate CLT.