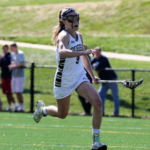 Kelly Dowd, originally from Stony Point, NY, began playing lacrosse in 6th grade. She went to North Rockland High School where her team won their first ever Section Championship her junior year in 2012. After graduating in 2013, she continued her lacrosse career at Queens University of Charlotte. Kelly captured team Most Valuable Player honor as a senior and also served as a team captain her senior year. She made the SAC All-Tournament team all four seasons of her career and was recognized with several Offensive and Defensive Player of the Week awards. A four-time All-South Atlantic Conference selection (three first-team, one second-team), Dowd is Queens all-time leader in draw controls with 210. She was a two-time all-region choice by the Intercollegiate Women’s Lacrosse Coaches Association. She was named second-team All-American as a senior. She graduated from Queens in 2017 with a degree in Interior Design and Architecture. Kelly is the assistant coach at Belmont Abbey College and has coached with QCS since 2017.