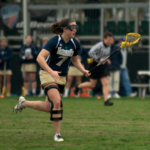 Flannery Nangle, originally from Auburn NY, was a four-year varsity starter for Auburn High School. She was the New York Class AA leading scorer during her junior season, was named a U.S. All-American her senior season, and was selected team MVP and first-team all-Central New York in both her junior and senior seasons. Flannery was recruited to play for the University for Notre Dame, where, despite suffering two season-ending knee injuries, was a two-time Monogram Winner, two-time Big East All-Academic team member, and three-time NCAA championship participant. She graduated with a degree in business administration in 2012 and began a career in marketing in Boston, where she continued to stay involved with the sport, coaching lacrosse with the New England Twisters club team. After moving to Charlotte, Flannery began coaching with the QCS/Ultimate CLT in the fall of 2018.