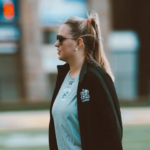 Kirsten began playing lacrosse in the 6th grade. She was a four year starter at Fort Mill High School and was voted captain as a senior. As a sophomore, Kirsten led her team to the South Carolina State Championship by scoring the winning goals in overtime in both the semi-finals and championship games . Kirsten earned all-state awards all four years of her high school career including attack player of the year and player of the year in 2012. Kirsten is also an alum of QCS and a graduate from Limestone University (DII). At Limestone, she was a four year contributor to the nationally ranked team. Kirsten graduated in Spring 2018 with a bachelor’s of science degree in exercise science and a minor in coaching. Kirsten is working in the emergency department at CMC main and the head coach at Fort Mill High School. Kirsten started coaching with QCS/Ultimate CLT in the summer of 2018.