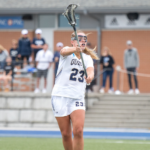 Kara is from Pasadena, MD where she was a varsity captain of both the women’s lacrosse and basketball teams. Throughout her high school career, Kara received multiple All-County and All-Region First Team honors. She was named Greene Turtle International High-School Athletics MVP. Kara played D1 women’s lacrosse at La Salle University in Philadelphia, PA before transferring to Queens University of Charlotte. At Queens, Kara was named a captain and received SAC Player of the Week, Second team All-Conference, First Team All-Conference, First team All-Conference Tournament twice, and has led the Royals to two Final-Four NCAA Appearances. In her 2.5 seasons as a Royal, Kara has been welcomed to the “century club” surpassing 100 career points her junior year and 100 career goals her senior year. Her senior year, Kara led the Royals to the DII National Championship where she was named to the First team All-Tournament team and as an All-American. Kara started coaching with QCS/Ultimate CLT in the summer of 2020.