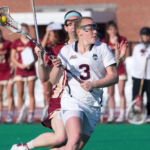 Jacqueline started playing lacrosse as a freshman in high school. She played four years of Varsity lacrosse at St. Francis High school in Mountain View, California. Jacqueline was team captain and MVP her junior and senior year. During her senior year, Jacqueline led her team in every statistical category, tallying over 100 goals that season. Jacqueline holds both single-season and career records at her alma mater. Jacqueline was awarded the Most Outstanding Senior Athlete, Academic All American, and All-Santa Clara Valley Athletic League Outstanding Attack.

After high school Jacqueline took her talents to a top-tier Division One program at the University of Connecticut. Jacqueline studied Management Information Systems and graduated with high honors with a Bachelor’s of Science in 2017. At UConn, Jacqueline was an attacker who played in all 68 games, starting in the majority of them. She completed her senior season with 52 points on 40 goals and 12 assists. Jacqueline, who was also a draw specialist,  led her team in draw controls with over 100 in her career. Senior year, Jacqueline was named to the All Big East team, IWLCA 2017 Zag Sports Academic Honor Roll, and represented UConn at the IWLCA Senior All Star Game.

Jacqueline recently moved to Charlotte, North Carolina and works full-time as a Product Manager at a software start-up. Jacqueline started coaching with QCS/Ultimate CLT in the summer of 2021.