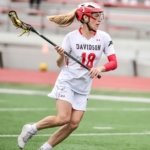 Sophia Sgroi played High School lacrosse at Newton Country Day School in Newton MA where she earned New England Pre School Athletic Conference Female Athlete of the Year during her senior year in 2015. Sophia continued her career at Davidson College in Davidson NC. While at Davidson College, Sophia saw action all four years and finished her career with 68 goals, 20 assists, and 192 draw controls. She spent her first three years at Davidson as a midfielder and finished her final season starting every game as an attacker. During her final year, Sophia was a Captain for the Wildcats and set the new single season record for draw controls with a personal best of 110 and ended her career with 192, good for second place on the all-time record books.

Sophia graduated with a degree in Communication Studies in May of 2019. Sophia is currently working at Red Ventures in Fort Mill SC as a Strategic Digital Marketing Analyst.

Sophia started coaching with QCS/Ultimate CLT in the summer of 2019.