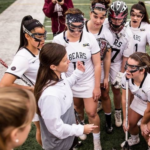 Carlee Buck is from Penn Yan, NY where she lettered in soccer & basketball, and was named a US Lacrosse All-American at Penn Yan Academy. She attended Stony Brook University where she started all 65 games for the Seawolves. She ended her career as the all-time leader in points and assists, finishing with 92 goals, 133 assists and 225 points. Buck was an American East All-Rookie Selection, a First Team selection twice, and was the NCAA DI statistical champion for assists per game in 2005. Buck graduated from Stony Brook in 2007 with a bachelor’s degree in sociology.

Buck is entering her fifth year as the Head Women’s Lacrosse Coach at Lenoir-Rhyne University. During the 2018 season, Buck was named the South Atlantic Conference Coach of the Year after leading the Bears to their first ever Regular Season Championship and a perfect 8-0 mark in league play. Buck led the Bears to a 12-11 win over Queens to become the first SAC team to beat the Royals in league play in history. Under Buck, Ines Flueck was selected the SAC Player of the Year and three others were named to the First Team All-Conference.

Prior to LR, Buck served as the Assistant Coach & Recruiting Coordinator at Limestone College from 2013-16. While on staff, the Saints went 68-10, earned a spot in the NCAA Division II National Championship, and won four straight Conference Carolinas Championships. In addition, Buck helped coach 15 players who earned IWLCA All-America honors.

Before Limestone, Buck coached at Fresno State in Fresno, California (2009-2012) and helped start their program. She was an assistant coach for three years, in addition to serving as interim head coach for the 2011 season.

She worked with the AC Lacrosse Club Middle School and High School Teams from 2016-2020 and helped start and direct the Saints Lacrosse Club from 2014-2016. She has been involved with youth and high school lacrosse development in both SC and NC since relocating to the Carolinas and is a CWLOA Collegiate Rated Official.

Carlee started coaching with Queen City Stars in the summer of 2020.