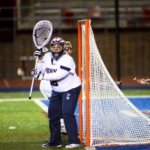 Britt Brown began her lacrosse career playing at Riverdale Country School in New York City and Berkshire school, a boarding school in Massachusetts, where she received four varsity letters, a New York State Championship (2011), and a New England Class B Championship (2012). Britt began her college career at the University of Virginia, and appeared in three games during the 2014 season where the Cavaliers made it to the Final Four. After taking the 2015 season off, she decided to continue her lacrosse career at the University of Pennsylvania where she started her junior and senior year. During her junior campaign, she started all 18 games for the Quakers where she led the Ivy League in GAA (7.71), which ranked No. 9 in the country. She was No.3 in the Ivy League and No. 13 in the country in saver percentage (.490). She was honorable mention for All-Ivy. During her senior year, Britt started all 17 games where she was Ivy League Defensive Player of the Week three times, lead the Ivy League and ranked No. 4 in GAA (8.40), and second in the Ivy League and No. 3 in the country in save percentage (.540). She was named to the IWLCA first-time All-Region and second-team All Ivy. Upon graduation, Britt earned her B.A. in History from Penn and moved down to Charlotte to begin her career in investment banking. She began coaching with QCS the summer of 2018.