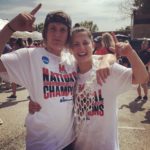 Congratulations to Ultimate Lacrosse 2016 graduates Kali Hartshorn and Victoria L’Insalata! Kali and Vic just won their second NCAA Championship at the University of Maryland, defeating Boston College 12-10 in a game that is sure to go down in lacrosse history! Kali scores 2 goals and won 3 draw controls in the victory. We wish Kali and Vic the best of luck as they start their quest to defend the championship next season!