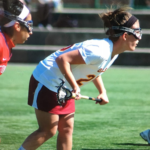 Amber was a 4 year starting defender at Iona college, graduating in 2012 with a degree in psychology. She then went on to become a graduate assistant/defensive coordinator at Lindenwood University (DII) where she helped lead the team to its first final 4. In 2014 Amber graduated from Lindenwood with a Masters in Education and became the head coach at Saint Anselm College in Manchester, NH. In 2015 Amber became the assistant coach at Davidson College where she coached for 3 years. After the 2017 season Amber made the decision to leave college coaching to pursue board certification in behavior analysis and has now returned to Davidson for the 2019 season as an assistant coach.