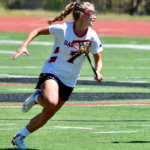 Nicole is originally from Westford, Massachusetts and began her lacrosse career as a four-year starter and two-time captain for Bishop Guertin High School. Nicole continued her lacrosse career as a midfielder at Davidson College, where she played in all 70 collegiate games and was named captain during her junior and senior years. In addition to finishing her final season ranking 6th in the Davidson records with the most single-season draw controls, Nicole made 2nd team all-conference and was named the team’s MVP her senior year. Nicole graduated from Davidson in 2017 with a BS in Psychology and currently works in digital marketing at Red Ventures in Charlotte, NC. She has been coaching with QCS/Ultimate CLT since 2017.