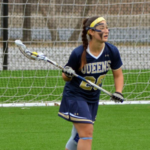 Nicole May played high school lacrosse at Northern Guilford High School in Greensboro, North Carolina where she helped start the program, was a 4 year starter, and captain. She holds the record for the most career goals along with other All-Conference and All-State titles. She was recruited to play Attack at Queens University of Charlotte in 2011. She played all 4 years and was voted a captain her senior year. Nicole graduated with a degree in New Media Design in May of 2015 and currently works at Rack Room Shoes as a Social Media Manager.

Nicole has been coaching for QCS/Ultimate CLT since 2012. In her spare time, she also officiates Lacrosse and Field Hockey.