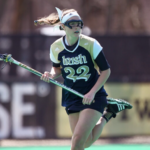 Maggie Smith played high school lacrosse at McDonough School in Maryland winning two conference and national championships. She went on to play at the University of Notre Dame where she graduated with a double major in Sociology and Peace Studies. During her playing career she was selected to the all-big east team twice and the all ACC second team as a senior. She was a two time All-American and Co-IL national defender of the year in 2010. After graduation Maggie began her coaching career at Stetson University it DeLand, FL for two years. She returned to the University of Notre Dame as an assistant for two years in 2016 helping coach multiple All-Americans and competing in the NCAA tournament. She started nursing school at Northeastern University in Charlotte in the summer of 2019 and has been coaching with the QCS/Ultimate ever since.