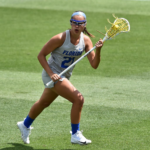 Lexi is originally from Gainesville, VA then moved to Scottsdale, AZ for 2 years where she played HS lacrosse at Desert Mountain HS in Scottsdale, AZ and received the Arizona All-State Attack Player of the Year and Midfield Player of the Year in 2012 + 2013. She also played on the Brine All-American Team West and Desert Heat travel team while living in Arizona. Lexi then moved back to Gainesville, VA and played HS lacrosse at Patriot High School in Nokesville, VA where she earned conference player of the year in 2015 + 2016, as well as receiving All-Conference, All-Region, All-State and All-American honors.

She also served as captain Junior and Senior year for high school, and played on the SuperNova Travel team. Lexi went on to play lacrosse at the University of Florida- a top 10 NCAA team all 4 years while she was there. She made it to the NCAA playoffs each year, until the season was cut short by COVID her senior year in 2020. Lexi made the Conference Academic Honor Roll all 4 years and graduated from the University of Florida with a Bachelor’s degree in Business Management.
Lexi currently works in sales at an IT Staffing company.

Lexi started coaching with Ultimate CLT in the summer of 2022.