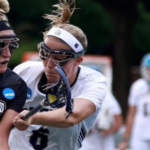 Jillian Mitrecic is originally from Ocean City, Maryland where she played lacrosse for Stephen Decatur High School, graduating in 2017. After graduating, she continued her lacrosse career at Queens University of Charlotte. At Queens, Jillian appeared in 44 games and was a two year starter, earning the title of captain her senior year. She helped lead her team to their 7th consecutive SAC Championship and first ever NCAA National Championship game, the first time in program history.

Jillian graduated from Queens in 2021 with a degree in Multimedia Storytelling and a minor in Graphic Design. Jillian currently works at Pinckney Marketing as an Account Coordinator.

Fall of 2022 is Jillian’s first season coaching with Ultimate CLT.