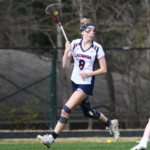 Erin is originally from Stratford, New Jersey where she started playing lacrosse her freshman year of high school. From there she became a 4-year varsity starter, a team captain her junior and senior year; as well as, 3rd Team All South Jersey her senior year. She graduated from there in 2015 and continued her lacrosse career at Catawba College in North Carolina. There, Erin was a four year starter in both midfield and attack positions. She earned All-SAC Honorable Mention both junior and senior, and SAC Attack player of the week once her junior year. She was also announced team captain her junior and senior year. At Catawba, she studied Middle School Education with a concentration in Math and a minor in Athletic Coaching. Erin is currently a 7th grade math teacher at Sedgefield Middle School and a Varsity Assistant coach at Ardrey Kell High School. Erin started coaching with QCS/Ultimate CLT in the summer of 2021.