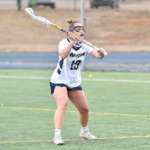 Emmy is from St. Augustine, Florida. She began playing lacrosse in the fourth grade. Emmy was a four year varsity starter at St Augustine High School, where she earned all-conference honors and served as a captain her junior and senior year. Emmy played defense at Wingate University where she was named a captain and received the D2 ADA Academic Achievement Award and a spot on the IWLCA Academic Honor Roll. She was a part of a defense that consistently ranked in the top 3 in the conference for goals-against average. Emmy graduated magna cum laude in 2021 with a BS in Chemistry. She now worked as a lab chemist. Emmy began coaching for Ultimate CLT in the fall of 2021.