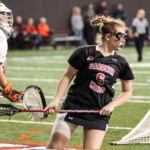 Cassy is originally from Cincinnati, Ohio. She played varsity lacrosse at Sycamore High School, winning the state championship her senior year. She moved on to play for the inaugural, division one lacrosse team at Gardner-Webb University where she also served as a team captain. She played attack freshman year, then began her sophomore year as a first-time goalie after the team’s goalie transferred schools. During her season as goalie, she was second in the nation for saves and third in the nation for saves per game. Cassy finished her last year as an attacker and graduated early with a degree in Business Administration and later completed her MBA.

Cassy currently works for Bank of America as a Stress Testing Analyst, and this will be her first season with Ultimate.