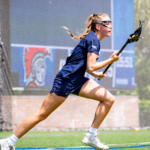 Cammy Case is originally from Elliott City, Maryland, where she began playing lacrosse when she was 6 years old. She attended Mount Hebron High School where she received 2 varsity letters for lacrosse. After graduating in 2015, she continued her lacrosse career at Queens University of Charlotte with both academic and athletic scholarships. Cammy played her freshman year at midfield and started every game from her sophomore year to senior year at defense. She was named to the South Atlantic Conference first-team her sophomore through senior year. Cammy’s team made it to NCAAs three out of her four years, including her senior season. During her sophomore year, Cammy was named to the IWLCA All-Region third team. She was also named defensive player of the week. During her junior year, Cammy set single-season records at Queens in both caused turnovers and ground balls. She also led the nation in caused turnovers per game. Cammy was named defensive player of the week 4 times as well as National defensive player of the week once. She earned all-tournament team for her conference championship tournament. She was named to the IWLCA All-Region first team and was also named a first team All-American. She was also named SAC Scholar Athlete of the year. During her senior year, Cammy was named team captain and earned defensive player of the week. Her team made it to the Final Four of the NCAA Tournament. She was named a second team All-American.  Cammy graduated from Queens summa cum laude in 2019 with a major in Marketing and a minor in Sport Management. Cammy began coaching for QCS in the winter of 2018.